Last night at the awards ceremony which closed the Sarajevo Film Festival, the project FORGET THE OCEAN, WHY NOT TRY SURFING THESE INSANE RIVER WAVES by Marko Grba Singh, to be produced by the Serbian company Non-Aligned Films, won the €20,000 Eurimages Co-production Development Award presented at the CineLink Co-Production Market. The Jury made up of Ada Solomon (Microfilm, RO), Yorgos Tsourgiannis (Horsefly Productions, GR) and Els Hendrix (DE) for Eurimages chose to reward “both the original take on the themes of enduring racism and xenophobia and the bold narrative approach – combining and challenging the format aspects of both documentary and fiction – to tell the timeless love story between Gordana and Mahinder”. More information available on the Festival’s website.

The next Eurimages Co-production Development Award will be presented at the Junior Co-Production Market of the event Cinekid for Professionals which will take place on 19-22 October in Amsterdam. 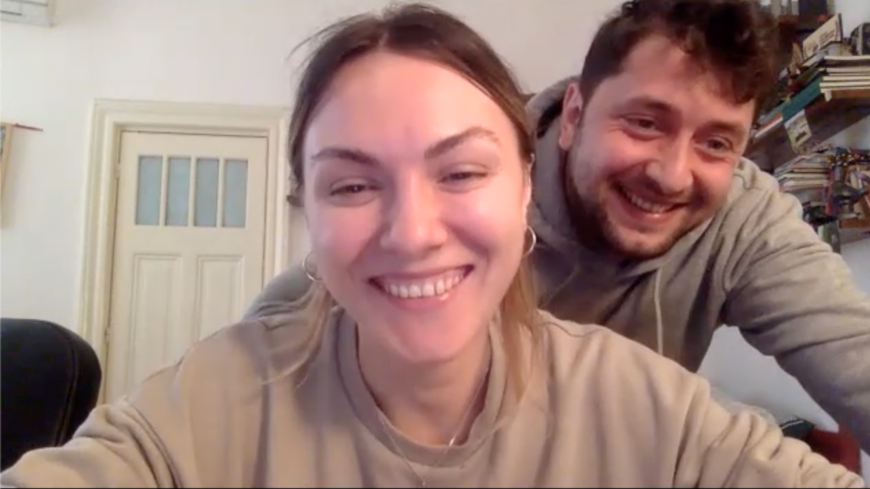 03.05.2021 – During the closing ceremony of the CPH:FORUM which took place on 30 April, the Eurimages Co-Production Development Award of € 20,000 dedicated to documentaries went to the project TATA/FATHER by Lina Vdovîi & Radu Ciorniciuc, to be produced by Monica Lăzurean-Gorgan from the Romanian company Manifest Film. The jury consisting of Monica Hellström, (producer from Final Cut for Real), Xavier Henry-Rashid (CEO of Film Republic) and Nino Kirtadze (Eurimages National Representative for Georgia), which went through a total of 14 ambitious projects, was particularly impressed by this one which takes on a complex personal story with depth, trying to understand the cycle of violence and its mechanisms. More information on the Festival’s website. 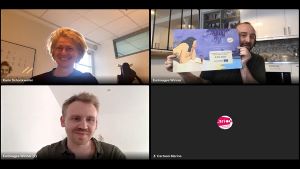 12/03/2021 – Yesterday, during the digital edition of Cartoon Movie 2021, the Eurimages Co-production Development Award of €20,000 was granted to the project SHADOWS by Nadia Micault. This animation will be produced by the French producing company Autour de Minuit in co-operation with Panique! from Belgium and Schmuby (FR). The jury composed of Emmanuelle Chevalier (Les Films de Préau, FR), Emil Simeonov (Pro Films, BG) and Karin Schockweiler (LU) for Eurimages was impressed by this ambitious project that deals with serious matters such as migration, family and relationship, and is told like a fairy tale. The talented team which is developing this project has been co-operating since the beginning. More details are available on the festival’s website. 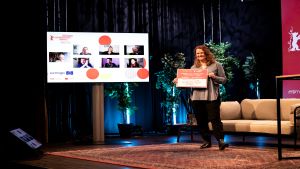 03/03/2021 – The Eurimages Co-production Development Award amounting to €20,000 presented in the framework of the Berlinale Co-Production Market went to the project THE OBLIVION THEORY to be directed by Annemarie Jacir and co-produced by Incognito Films (FR) and One Two Films (DE). The jury composed of Tine Klint (LevelK, DK), Luís Urbano (O Som e a Furia, PT) and Els Hendrix (DE) for Eurimages was very impressed by this strong adaptation and relocation of José Eduardo Agualusa’s novel “Teoria Geral do Esquecimento” into Gaza at the time of the First Intifada. Annemarie Jacir convinced the members of the jury with her clear vision and a passion for her story that she will develop with a strong female team and several experienced European co-producers. See the website of the online European Film Market . 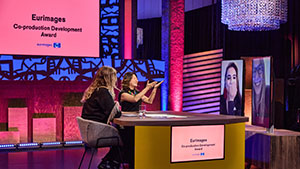 8/02/2021 – Last Friday, the very first Eurimages Co-production Development Award of the year presented in the framework of CineMart at the International Film Festival Rotterdam went to the project CORA to be directed by Evi Kalogiropoulou and produced by the company Neda Film (GR). The jury composed of Maria Drandaki, Fiorella Moretti and Pablo Perez de Lema (ES) for Eurimages began by highlighting the quality and diversity of the projects developed both by experienced directors and new talents. After exchanging in a constructive manner, the jury chose to reward a supernatural drama featuring two unexpected female characters struggling for freedom and identity in a unique and colourful industrial setting. More information is available on the website of the film festival.